Have you seen the movie 'Frozen'? It is absolutely darling. Here is a little clip for any that have seen it. I hope it makes you giggle.
Posted by Maria at 12:46 AM No comments:

At the end of May we had a special delivery; it was a small box that was loudly peeping. Yes we were bit by the chicken bug and decided that it was time to have several of our own. Even though we live within the city borders we researched on line and found out that we could have up to two chickens without a permit but absolutely no roosters. We bought four little ladies and a permit. Since we live in Minnesota I double checked to make sure that the breeds we purchased were cold hardy and bred to be especially good layers of plump, large brown eggs (except one who is an Easter Egger and can turn up laying green, blue, yellow or pink tinted eggs. Not all but just one of those colors.) One of the chicks was to be a surprise breed of brown layers. She turned out to be a white hen but I am still not quite sure which type she is, it will probably be more obvious as she continues to mature. I have narrowed it down and believe her to be a White Plymouth Rock. She has the thicker yellow legs and shall be a brown layer. The others are an Easter Egger, Partridge Cochin and a lovely little black Australorp.
Posted by Maria at 12:44 AM No comments:

Ever have pancakes for supper? Or lunch, as well as breakfast?? How about as a midnight snack?
I thought that this video was so funny that I just had to re-post it. It reminded me of my husband who is definitely a pancake enabler. I borrowed it from a great blogger who also sells some of my favorite yarn on Etsy. Here is her shop: www.etsy.com/shop/knit   Check it out!
Posted by Maria at 4:45 PM No comments: 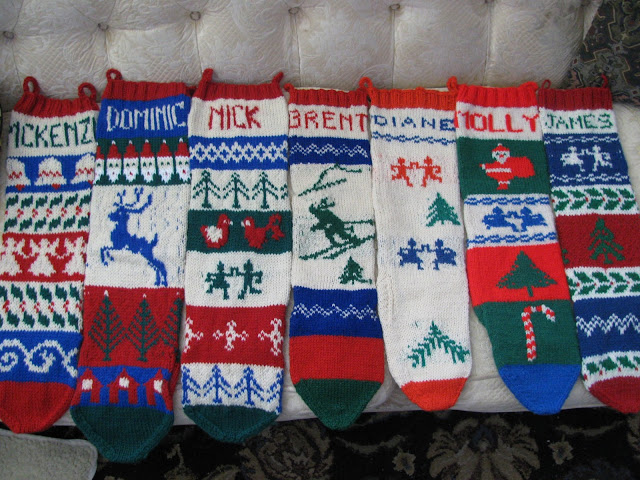 So, after a small repose, here are the Christmas Stockings that I made for this Christmas for a friend. It was quite an adventure since I have not officially done stranded knitting before. I took on the assignment hoping to learn and be experienced in stranded knitting and I believe it was a successful opportunity.
Assignment: I was given four old traditional American knitted Christmas stockings and asked to produce three additional stockings in similar fashion. They were to have the names of three additional family members that have been welcomed to the family since the last stocking was made. I had a limited color palette of blue, red, off-white and green. The motifs were to be similar as well. 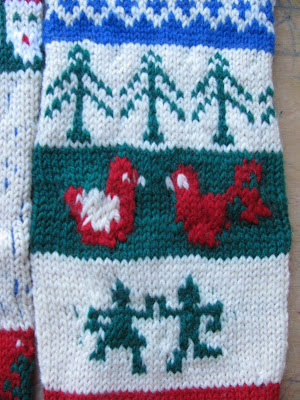 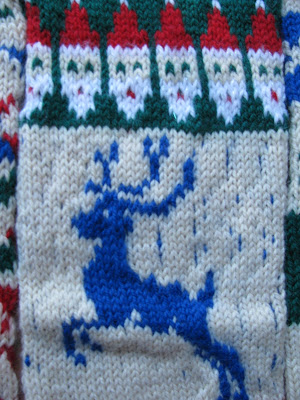 As you can imagine some research was in order. I managed to find a really old pattern that fit the bill perfectly. In fact it is possible that it was the same pattern that the grandma who made the original stockings used. I also searched for some newer chart patterns to incorporate into the stockings so that they would not be exactly the same, but would look like they belonged with the others. I came up with swirls, snowflakes, reindeer, Santa heads, dancing couples and houses. The original stockings looked like they were made with sport weight yarn but I didn't figure this out until after I purchased all the yarn that I wanted to use. I settled on a worsted weight, strong yarn by Nature Spun. It is 100% moth proofed wool and they carried the perfect colors to use. I used two skeins of each color: 112W Elf Green, N46W Red Fox, 116WBlue Boy and N91W Aran.


After I gathered all of the materials came the hard part; figuring out the math to make all of the charts work in the stockings. I started with about 62-64 stitches for each stocking. This number range worked well with all of the charts and with the stitches needed to spell out the names. Here and there some decreases and increases were needed but nothing too major. I made small schematics to figure out the order of charts for each stocking and to keep me on track. To do this I estimated the average number of stitches in length each of the other stockings was and then decided where to add blank rows as padding between the chart patterns for the new stockings. I also decided ahead of time which colors I would use for each of the charts and how they would look in regards to the rest of the colors.
I think they turned out pretty well and the new owner of these stockings was quite happy to see them. It really made me feel special to be a part of their family tradition in this way and it was much more economical than paying for a class to learn how to do this. Yes I did make some mistakes along the way and the last one turned out much better than the first. All in all it was worth the experience and I even had fun doing it. 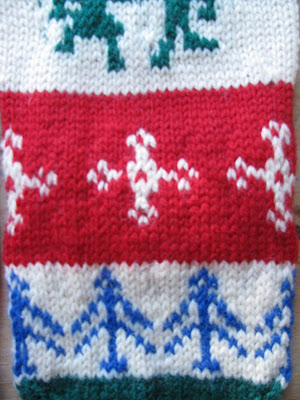 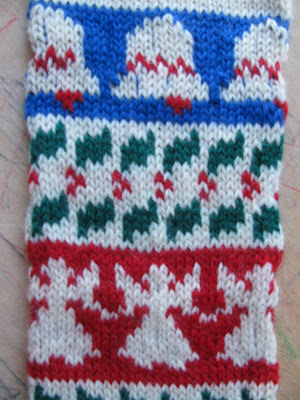 The actual knitting for each one took less than a week, and that was knitting done while I watched TV, took care of the baby and helped kids with homework. So, if you have been trying to gear up for that big project but you are nervous to start... I say "go for it!" You will be happy you tried something new, and if you don't like the result remember that you can always rip it out and use the yarn over again.
It really felt so great to accomplish my task and get these three stockings knit! Now I am tempted to make some for my own family. Maybe :)
Posted by Maria at 8:30 PM No comments:

I am not at a fancy party although I did have a sip of champagne... no I am at home watching my darling little one and rushing to finish as many 2012 projects as I can before anyone now notices that it is no longer 2012.
Ha. I actually did greatly diminish my "projects to finish" list. This is good. Because that was one of my resolutions for 2012.
So... since I still have some left I guess I will continue with this same resolution but I will let you in on a secret. Ripping (aka frogging) is highly underestimated!! It really is incredible how awesome and free you feel when you just decide to let go of those not so perfect projects made with funky yarn that you have hiding in your closet and under the bed. Really if you are not enjoying it and not going to keep it, why not just get rid of it.
With that I say to New Years resolutions: "Bring it!"
Posted by Maria at 12:28 AM No comments:

This lovely gift was made using some luscious angora yarn that I hand dyed and hand spun. The fiber came from my senior buck Satin Angora named Thunder. He has been a faithful, well-loved fiber producer over the years and his wool spins up like a dream. I also get really nice subtle hues when I dye it. 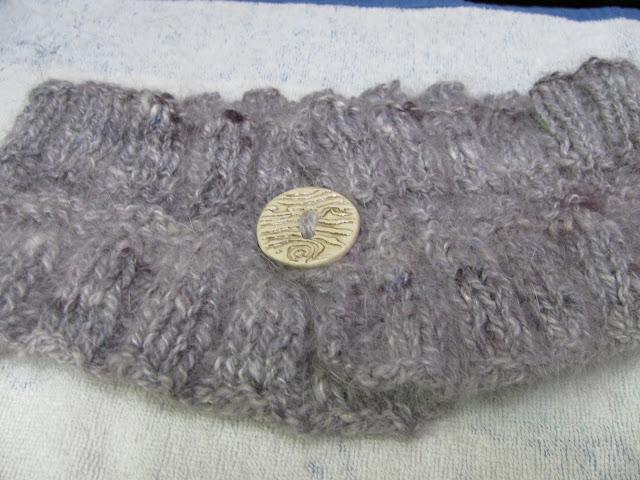 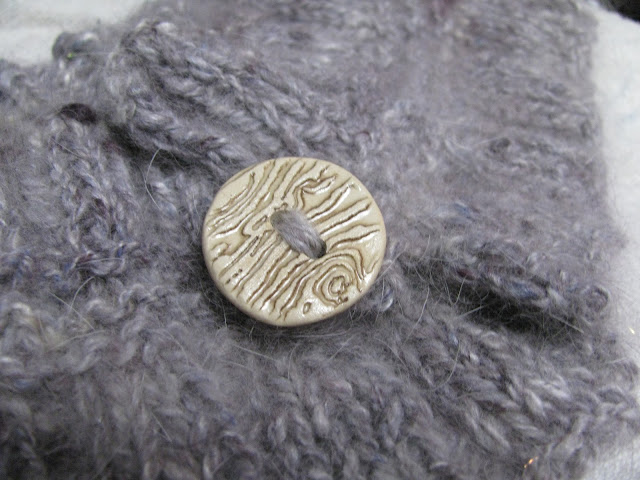 The button is from Jennie The Potter who is a local potter that makes lovely mugs, buttons, yarn bowls and other fabulous items. I made up the pattern just for this lovely yarn and am not sure yet if I will post it or not. If anyone is interested in having it I may write it up. The cowl is ever so slightly ruffly and is knit from the middle down and then stitches are picked up to knit the top. After sewing in the ends I added a length of yarn sewn through the middle for the scarf to slide along allowing the wearer to bunch it up here or there if they choose. 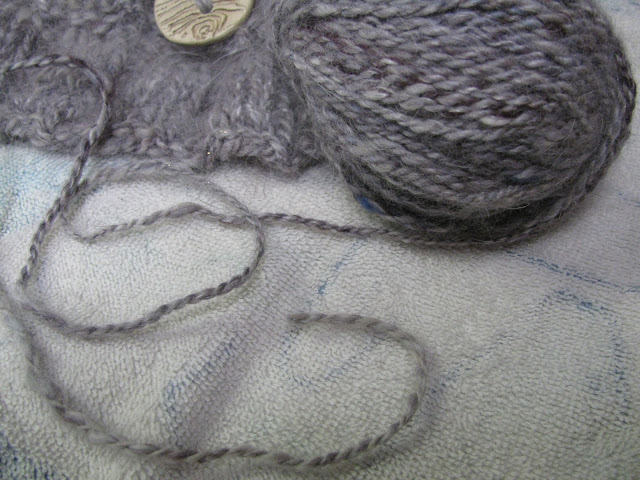 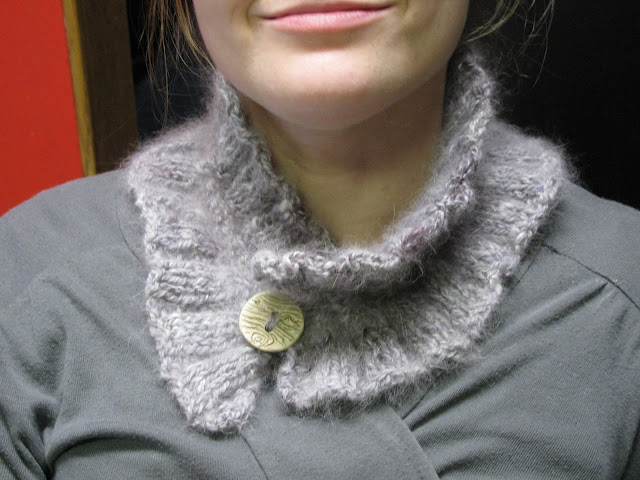 Originally I made this very special gift for my dear sweet sister but she is so graciously allowing me to gift it to my aunt who is in town for Christmas. Thanks Yeshie! You are the BEST and I love you sooo much!
Posted by Maria at 3:54 PM No comments:

I have been having a little experimental fun over at Tricksy Knitters and wanted to share this cute little chart with you all for free!
Enjoy!